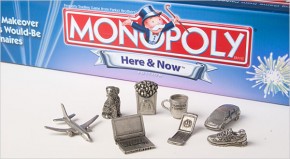 We here at hybrid dogs are so very excited to see our beloved hybrids making a splash. Hasbro made the choice to include a designer dog as one of the game pieces is the result of the current popularity of hybrid dogs with the labradoodle being one of the most well-known being owned by famous stars like Tiger Woods, Jennifer Aniston and Joe Biden. Other modern pieces that were added to the Hasbro game include a Toyoto Prius, McDonalds french fries, RAZR cell phone, laptop computer airplane, and a running shoe.

The labradoodle is a mix of Labrador Retriever and a Poodle. They are bred to be hypoallergenic, non-shedders. Labradoodles are intelligent, intuitive, very trainable and socialable. They were originally bred in Australia to be used as a guide dog.

Labradoodles vary in size from standards to miniature and come in a variety of colors including: black, white, red and chocolate.

The Monopoly: Here & Now edition that features the hybrid labradoodle was originally released in September of 2006. It features a complete array of new, modern touches that you will notice besides the tokens. Instead of collecting $200 when you pass Go this edition has players collect $2 million.

Since this edition of Monopoly is themed it is a limited edition and was only sold in limited quantities. Luckily the game is still available for purchase. It retails for $29.99. You can purchase Monopoly: Here & Now form Amazon by clicking here.

We hope to see more hybrid dogs making a splash in the future. 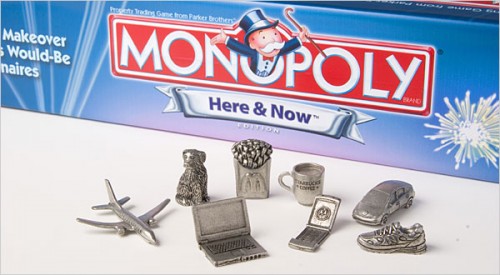